My name is Derek, and I am the Head of Production at New World Interactive. I hope that the new year is treating everyone well thus far, and that everyone is feeling refreshed after the holiday! This month’s SoP will be a little lighter in terms of content, but I’ll be sharing some details about what we’re working on and working towards throughout the Spring. Without further ado, let’s jump right into it!

Key Points of State of Production #5 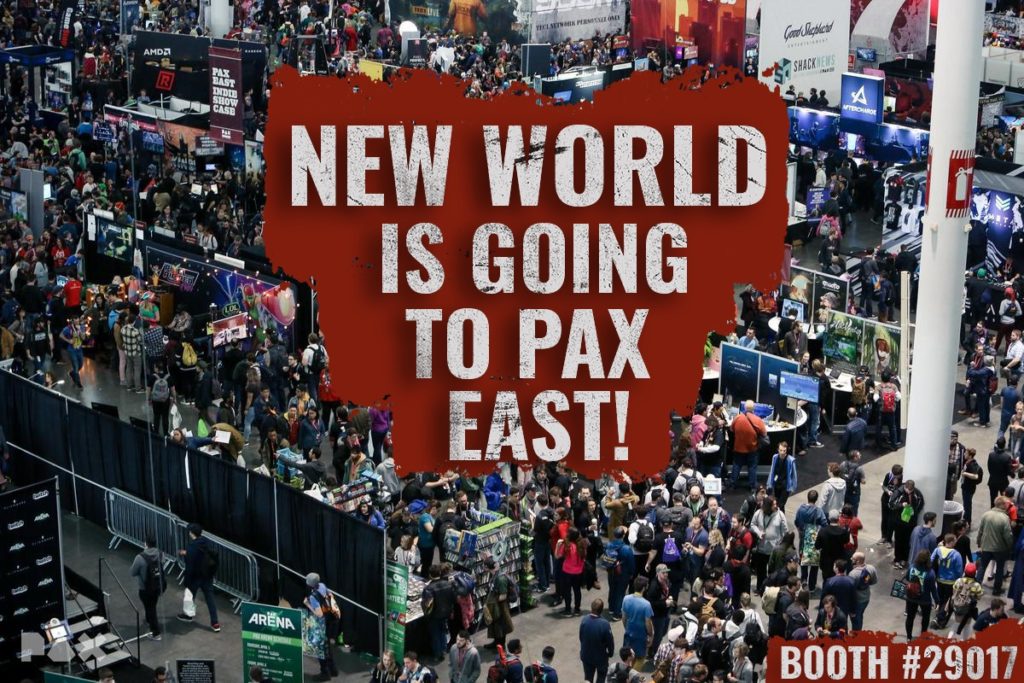 If you weren’t aware, New World Interactive will be attending PAX East in Boston with our publisher and partner, Focus Home Interactive! We’ll be demoing a playthrough of the game in a co-op capacity, and on controllers. A large part of this will be related to publicly testing some adjustments we’re making to our controller support for the PC version, in anticipation of our  console release. What you play at PAX East will likely serve as the foundation for controller configurations for the console release later this year, but we are also looking to hear feedback on what we have so far.

PAX East will include several key members of staff whom the community likely knows and loves, including our Communication Director Jon Higgins, and our Community Manager DaraDef. If you’re attending PAX East, make sure to swing by and check out our booth (#29017), and meet some key members of the team!

Update on the Console Porting Progress

I know many of you have been waiting to hear more about a set release date for the console build. Unfortunately, I don’t have an exact date (yet), but we are rapidly closing in on defining that date, as well as for announcing a date for when we will start accepting pre-orders for the console. Given that this is our studio’s first attempt at moving to consoles ever, we are also learning a tremendous amount about the number of challenges associated with a multi-platform release!

Our porting partner has gotten the game running on both Playstation and Xbox, but there is still a lot of work to do. There have been significant obstacles to overcome during this process; most notably, getting the game in a place to where it can even run within the memory constraints of console hardware. Before we even began the porting process, we knew this would be the most challenging aspect of this initiative, and we weren’t wrong. As it stands, the console port has made substantial progress, but we’re not quite ready to reveal it to the public until it is in a state that is representative of the quality level we expect. There’s also numerous TRC (Technical Requirements Checklist) implications that have led to additional development considerations; some examples include:

As we continue to optimize, refine, and tune the game for the console, we’ll provide more details about our first scheduled closed beta test, pre-orders, and our finalized launch date. We’re still working with our publisher and the first party platform holders to identify exactly what we need to have in place to conduct a successful and meaningful test on consoles, but rest assured, as soon as we’re ready, we’ll announce it to the world!

While we’ve received reports of this in the past, the inconsistent nature of this bug has made it extremely elusive to track down for our development team. Unfortunately, I am sad to report that this bug seems to have re-emerged, both in terms of prevalence and frequency. Internally, we’ve created a dedicated strike team to track down and identify the root cause. We have explored numerous solutions to this problem, but thus far, our initial hypotheses and testing hasn’t revealed a definitive cause. Our Technical Director, Steve Swires, has also opened a support ticket with Epic, just to ensure that this issue isn’t an engine-level conflict.

Additionally, we’ve enlisted the help of the community, and thanks to the community’s efforts, we’ve been able to hone in on a few likely start points for the problem. We have been aware of this issue since last week, but at my discretion, we have not deployed a hotfix at this time. There are multiple reasons for this:

I’d also like to take a moment to apologize for the impact that this issue has created for all of our players. I’d also like to take a moment to apologize for the disruption that these bugs have had on our ranked queues, on tournament planning and league-based play, and on our general players’ quality of life experience in-game. I know both the SEL and the DGL have been forced to postpone defining some key dates for some tournaments they want to conduct in the Spring. I fully accept the responsibility for how this has been addressed and handled, and quite frankly, we’re learning a lot from this experience, too. We know this is an extremely frustrating problem, and we’ve already reached out to Epic Games to see if they can clarify if this is an engine-related conflict. I wish there was a better explanation for why this is such a timely endeavor, but we had to work our way through this process, which unfortunately has taken a degree of time longer than initially anticipated.

As for resolution, it is impossible to know for sure if this will impact the issue at-scale, but we are planning to deploy a hotfix this week. Based on initial waves of testing, it appears to be a successful fix for the issue. If it doesn’t fix the issue, we’ll spin up a community “Mega-thread” and try to collect as much information as possible, and proceed forward with working the problem more completely.

Firstly, I’d like to thank our community for taking full advantage of using our 1.0 version of the player reporting tool! Participation rates were significantly higher than we expected for our first iteration, and it highlights the value of this implementation for us as a company. From the first month we introduced this feature into the game till today, we had over 51,000 reports, with an average of 870 reports a day!

I thought it might be fun to share some of the stats related to this with the community, so I asked our Lead Automation Engineer, Phen, to scrape some data and stats to share publicly.

We’re planning to expand upon the capabilities here later in the year, but for the interim, this early version is serving its purpose well-enough that we can shift development efforts to more critical studio needs.

Back in October, we had a few open meetings with the competitive community on Discord to collect feedback as well as explore ideas to improve the competitive scene. We have since created a competitive leaderboard where players can keep track of their score/placement in Competitive.

Additionally, we have increased the visibility of our community’s competitive events by better supporting and promoting tournaments through all of our social media platforms. This month, we were excited to support The Digital Gaming League’s first tournament of the year. The Newblood PUG tournament was catered to players new or less experienced in the competitive scene. Congratulations to the winners:  Nate.cr, LsteveTM, werewolf, papadeuce, and Toasty Joe!

You can watch the Newblood tournament vod here. The next DGL tournament is the World Cup on February 22/23 1:oo PM – 7:00 PM EST. Those looking to find teams can join the DGL Discord. The Sandstorm Esports League is another community league that we have been working closely with to support. Registration for the SEL Pro League Season 1 is open now. Register here! If you are interested in the SEL and upcoming events please join their Discord.

We rolled out the Sandstorm Partnership Program for content creators on January 15th! The goal of the program is to help creators build their channels and communities around Sandstorm to continue to grow across Youtube and Twitch. The perks the partners will be getting are ingame cosmetics, codes for giveaways, partner merch. With a focus on growth opportunities such as streaming on the steam store page, and networking opportunities with other partners. Some of you may already know some of the partners as they are well known in the community, but some will be fairly unknown as we look in bringing new channels to Sandstorm from competitors. We’ll be announcing the first wave very soon!

Originally, we had planned to release a console-exclusive map for a limited time period. The map in question, “Power Plant”, would be released with a 2-week exclusivity window for consoles, and would then be released on PC a bit later. We thought this would be a great way of generating some excitement, hype, and a degree of ownership amongst console players, and would grant them temporary access to a map that they’d have the chance to experience slightly earlier than our PC community. However, after consulting with our porting and publishing partners, they suggested that we not proceed in this direction. As such, we’ve been working on a perfectly new, functional, ready-to-go map. Instead, we’ve opted to release this map in our Spring update. We’ll continue testing it over the next few weeks to have it in a better state before deployment. We hope you’ll like it; it takes place in a unique setting that you haven’t seen before yet in Sandstorm. 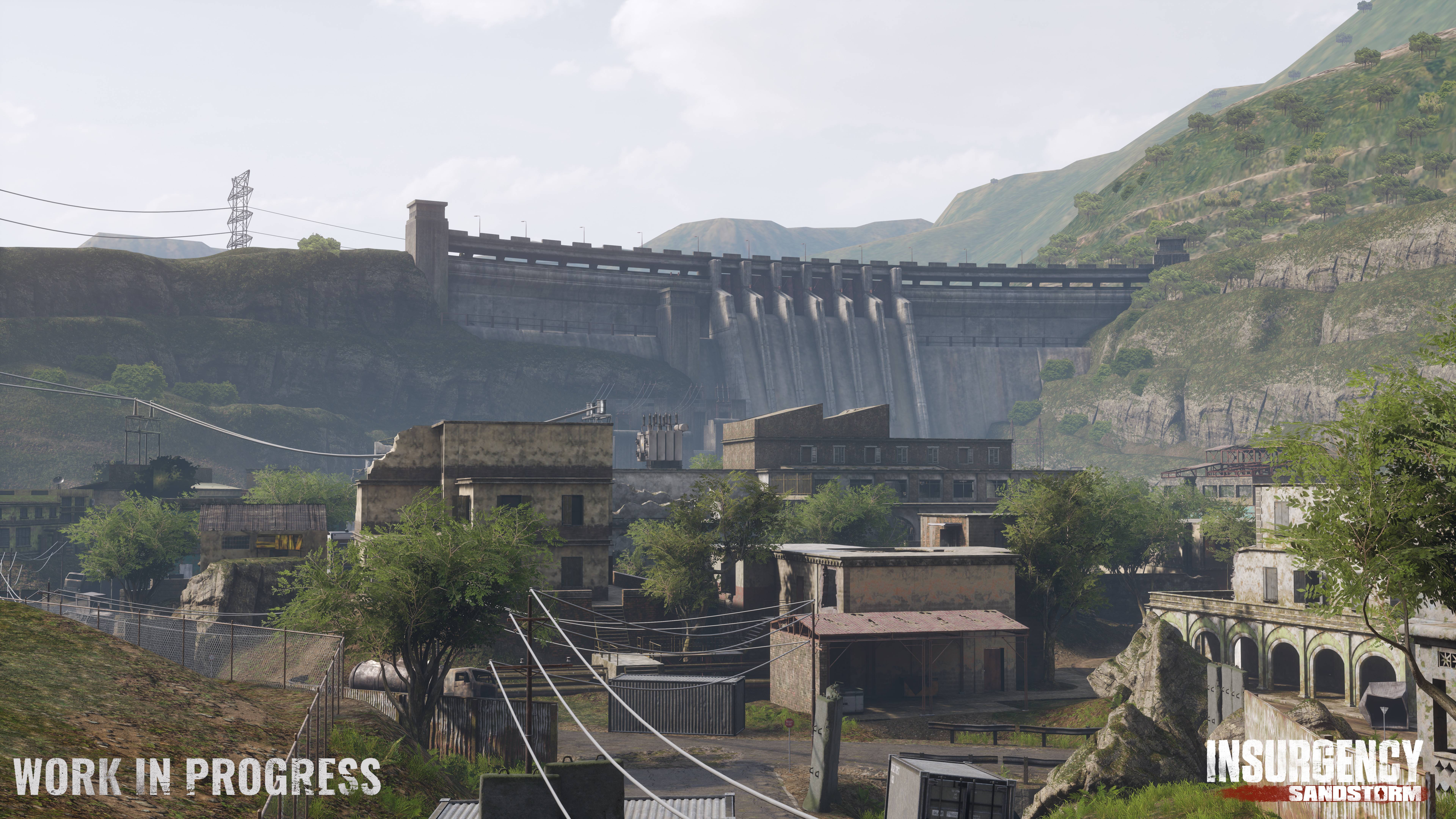 Furthermore, the community has been asking for new weapons for awhile. We’ll be shipping 2 new weapons in our Spring update as well. Additionally, we’ll be putting out a few new cosmetic items, for both the Security and the Insurgents, including the headset, leather jacket, and mask mentioned in our 2019 Roadmap.

Adding Domination Layouts to All Maps

Given how well-received the introduction of our Domination mode was when we deployed it last year, we thought the community might enjoy being able to play the mode on every map in the game. As such, in our Spring update, players will be able to play Domination on all existing maps, as well as any maps we release in the future.

Additionally, we made several improvements relating to spawn locations based on your feedback. We had several reports from players where they were spawning in the wrong direction, looking away from the objectives, as well as spawning too close to objectives or in the middle of a room directly in the line of fire.

For a long while, the co-op enthusiasts within our community have been hankering for some updates and changes geared towards the PvE side of gameplay. Your pleas have been heard. With our biggest update ever planned for later this year (codenamed “Nightfall”) we’ll need to implement and re-factor certain aspects of the AI to ensure they are able to behave intelligently within the context of this release. This includes improving the consistency of AI behavior for both day and night maps,  better-supporting new and community-created Co-Op modes, and future modes that we release to the community. I know this is just a bread-crumb trail, but I still wanted to share it, even if it is a bit early, so that co-op players know that we’ve not forgotten about them!

Many players in the community have been asking for more communication from the team beyond these State of Production posts. Now that our office setup is completed and streaming gear acquired, our Community Manager DaraDef will be livestreaming on our Twitch channel playing Sandstorm and doing a Q&A every second Wednesday. Our next stream is Wednesday February 12, 2:00 PM Mountain Time and the one after that on February 26th. If you missed the livestream from this past Wednesday, you can check it out here.

Additionally, Dara will be starting a Community Blog, differing from the State of Production posts in that it will be community focused – announcing contests, promoting community events, sharing community content, and more.

That’s all for this State of Production, we’ll be back with more information soon! Be sure to follow @InsurgencyGame on social media for regular bite-sized updates.