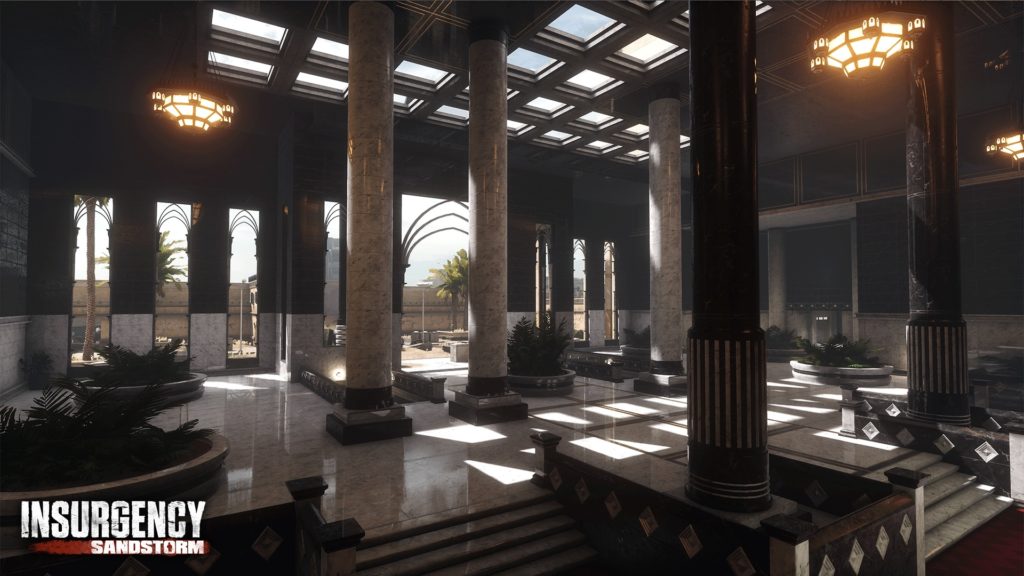 Hey everyone, my name is Michael Tsarouhas. I am the lead game designer on Insurgency: Sandstorm. Today’s Community Update is about our upcoming new map Ministry, which you can play right now in the Community Test Environment along with a new game mode, new weapons, new weapon optics, and more. Some of you might recognize this level as a classic from Insurgency 2014. Ministry was one of the most popular and iconic official Insurgency maps. It was (and still is today) the most played map for both Skirmish and Firefight modes, and the second most played map for co-op in Checkpoint mode. It was a favorite of our competitive Firefight players as well, always featured in tournaments and league play. Ministry stood out from other maps with its indoor room-clearing style gameplay, symmetric layout, and stylish visuals. It was a no-brainer that we had to recreate it for Insurgency: Sandstorm. 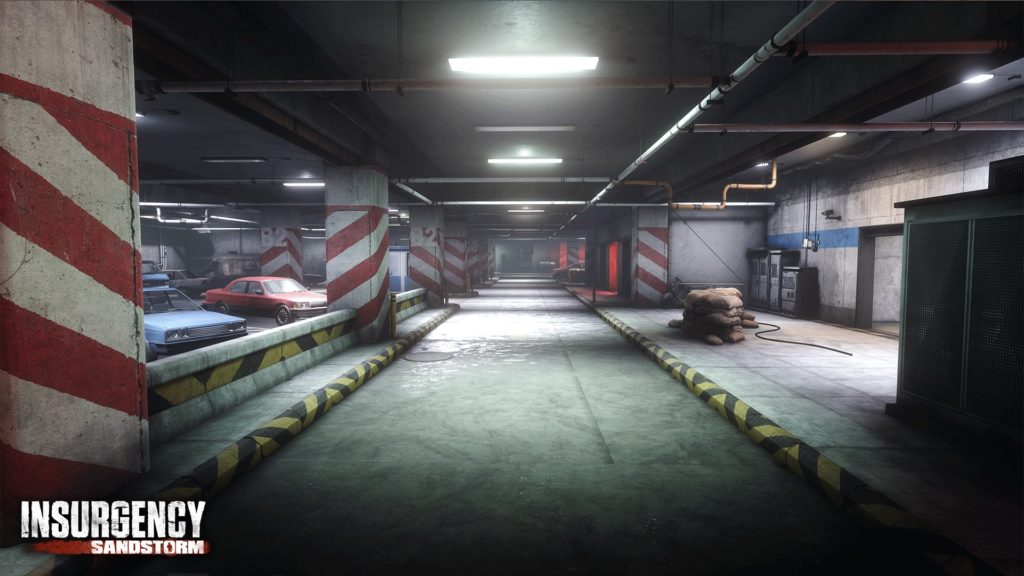 Below you can see my interview with some of the developers on our level design and level art teams. First we have our lead level designer Jeroen van Werkhoven, who in addition to designing levels himself oversees all things level related. A native Dutch resident soon to be in our new Calgary studio, Jeroen is the original creator of the classic Sinjar map from the Half-Life 2 Insurgency: Modern Infantry Combat mod as well as Insurgency 2014 standalone, so he’s been with us for a while. Next we have Vuk Banovic, our lead environment artist, who both manages and creates much of the art you see in game around our levels. Vuk has worked on a number of titles including the Farming Simulator franchise, The Solus Project, and Alone in the Dark, and we’ve been lucky to have him on our team for four and a half years now. Finally we have Maja Miskovic, who has churned out tons of beautiful props and art both big and small for all of Insurgency: Sandstorm’s levels. With a master’s degree in mechanical engineering, Maja went through no struggle picking up all the technical ability required for game art creation, but also never lacked the artistic skill her work needed. Native Serbians and yet another testament to the international quality of our team, Vuk and Maja work tirelessly together along with the rest of the team to beautify Sandstorm’s maps. They love level art almost as much as they love each other.

Summarize Ministry for us in five words. 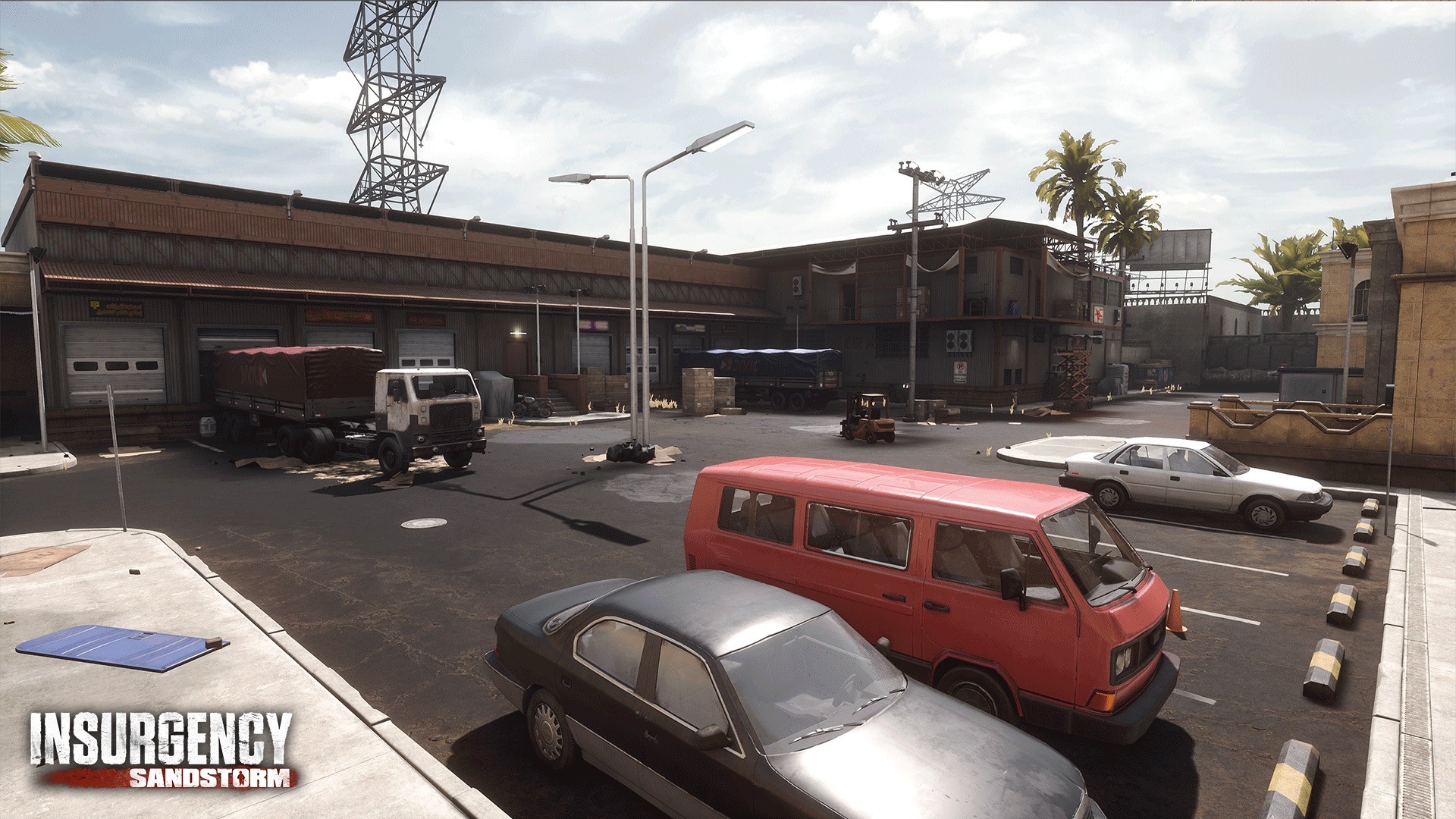 Take us through the history of Ministry and how you arrived at the decision to recreate it in Insurgency: Sandstorm.

Jeroen: Ministry’s original layout came to life in late development of Insurgency 2014 standalone. It was a collaboration between many different developers, including one of our long time level designers Jonny Hickenbottom. Near the end of Insurgency 2014’s post-release development, Jonny did a visual overhaul of the map which now serves as a base for this upcoming remake in Unreal Engine 4. Jonny also created the blockout for the remake, which is basically a simple layout and framework that comes at the beginning of designing a level. 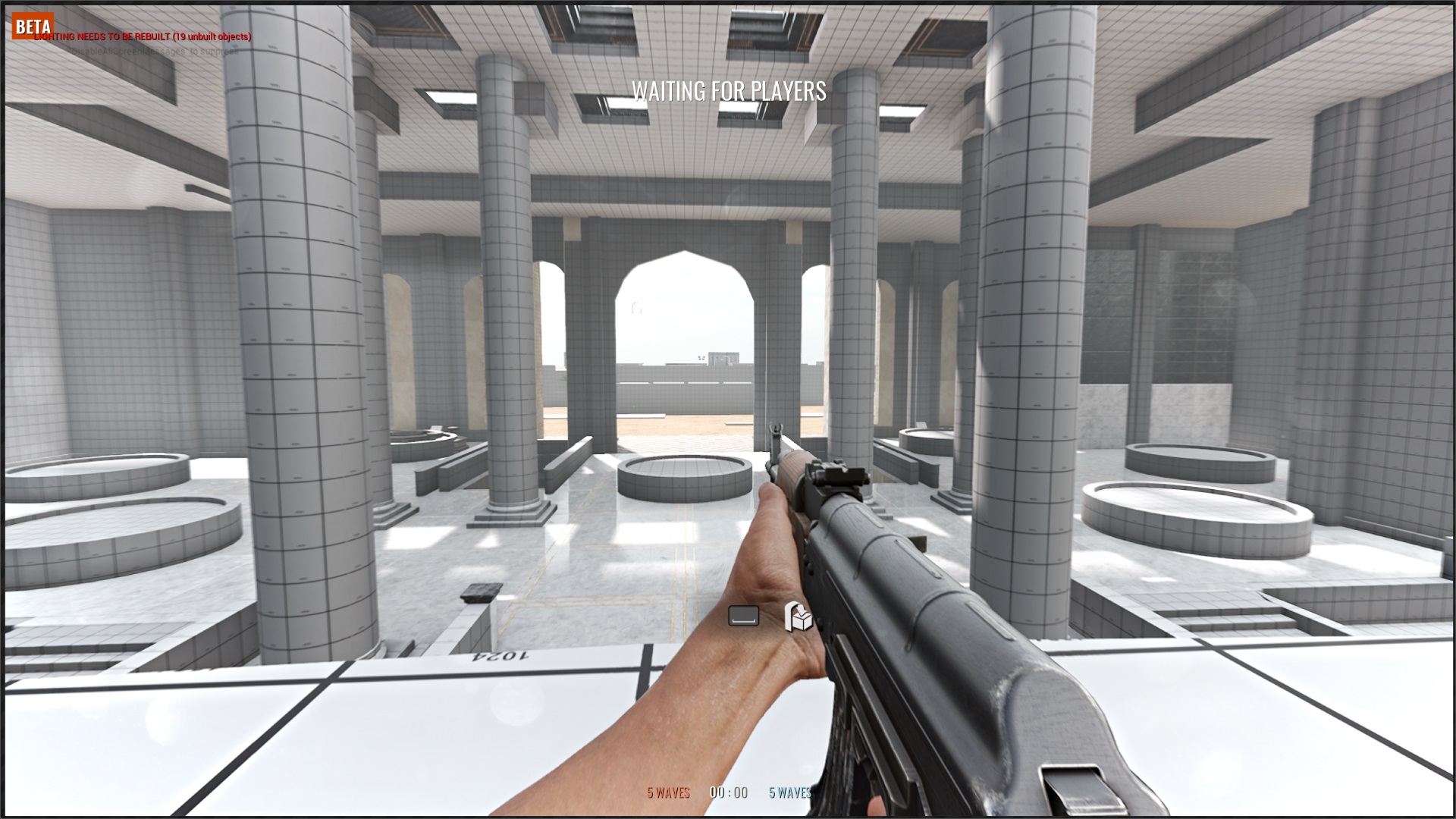 The map went through several iterations throughout its life to improve gameplay and visuals. When I joined NWI in 2014 it was actually one of my first tasks to make Ministry more visually appealing and do several gameplay adjustments. I remember this like it was yesterday because it put quite some pressure on me. The map was already very popular at that time, and I had just joined the team, but it didn’t take long until I figured out that the map needed a background story. I added subtle destruction with minimal gameplay impact to emphasize that the Ministry was a high-level target for Insurgents since it is a government building. I also made the building’s architecture more grand and impressive to look at from the spawn zones by making it much taller. It needed the wow factor! 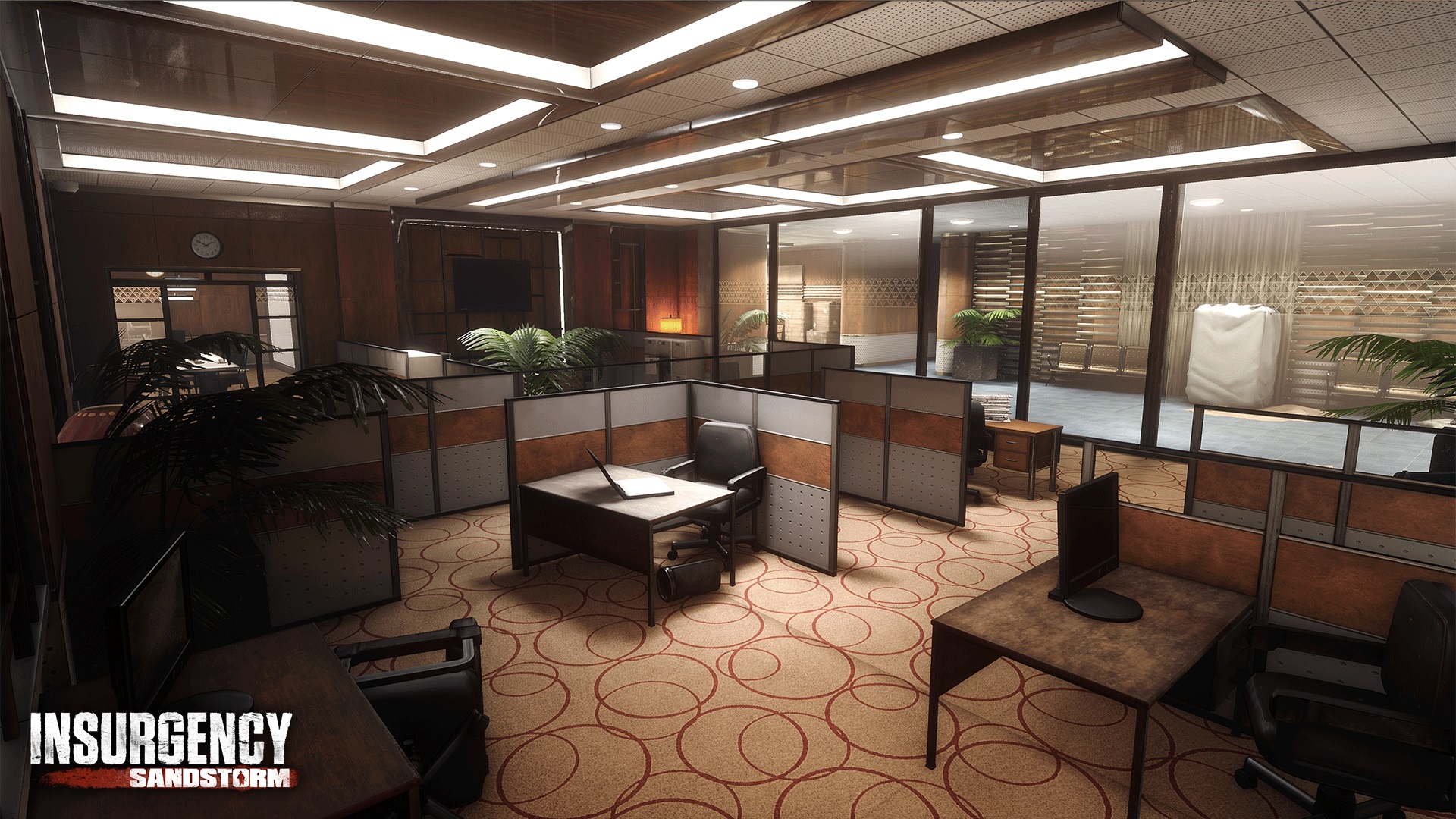 How faithful is the map layout to the original?

Jeroen: Ministry is very faithful to the original layout. With the endless possibilities of Unreal Engine 4, it’s essential not to overdo it. We didn’t want to expand the map for Sandstorm and make it much larger than the original. Ministry was always about the close quarters indoor fighting and fast action. The fast action is definitely one of the key ingredients of the map. Adding another accessible floor or adjusting the exterior can quickly impact the gameplay of the map, which we tried to prevent as much as we could. For us, it’s vital that every player new and old can enjoy this map in its purest form. Not to reinvent the wheel, but to replace the rims instead with shiny new ones!

What challenges did you encounter recreating Ministry?

Jeroen: The biggest challenge was the scale. We use set dimensions for our modular assets, so we couldn’t freely scale every wall, ceiling, floor etc. like we could in the Source engine with Insurgency 2014. We had to stick to our modular footprint and at the same time not make it too tiny or too large to not deviate too much from the run-up times on the original Ministry layout. We wanted to preserve the fast, intense, CQB action gameplay. Jonny Hickenbottom came up with the idea to export the original Ministry as a model and import it in Unreal. It took a bit of fiddling around at first, but once we found the scale, we were satisfied with it. It was more or less like solving a puzzle, making sure all modular pieces fit in the right spots.

Vuk: Since the majority of the map is indoors, the map was not too technically demanding. However, because of the same reason, it was very challenging to create believable looking indoor spaces with a high amount of detail without affecting gameplay negatively and without making it look too repetitive, cliche, or heavy for the eyes. So, artistically and visually, there was a lot of trial and error until I found a good global picture and found what works.

Maja: This was actually my first time professionally working on a visual pass, set dressing and world building. The first few days were really a challenge for me as I felt scared and excited at the same time, and I really didn’t want to screw up. Each decision I made, I questioned it, but with every day I felt more and more comfortable, and with each day I enjoyed it more and more. At the end I realized there’s nothing more fun than this. I have to thank Vuk and Jeroen for being such a great mentors and for all their patience and valuable feedback I got from them. 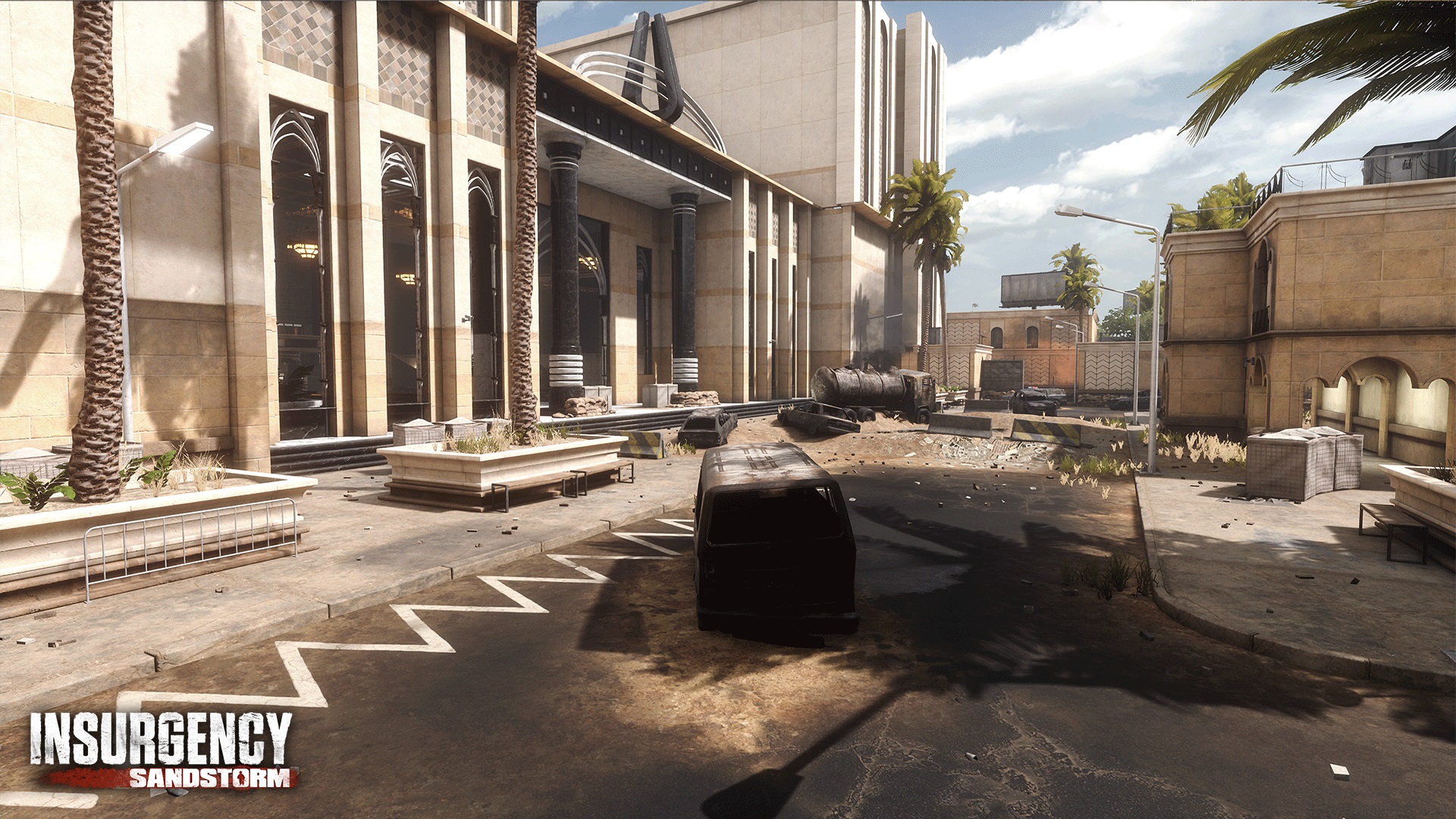 In terms of gameplay, what sets Ministry apart from other maps in Sandstorm?

Jeroen: Definitely the indoor gameplay and fast action. It’s not a map that you can take a breath and plan your next move. Around every corner there could be an enemy, yes I warned you! Also, the high level of breakable props adds to the fun factor of this map. But more about that later.

In terms of visuals, what sets Ministry apart from other maps in Sandstorm?

Vuk: Ministry is a more modern looking map with overall much less wear and tear than our other maps. It has a particular mood that is in one way cozy and beautiful, but at the same time very official as you would expect from a government building. These qualities give it a special touch that can give you scary goosebumps. You have intense combat in a confined building that through its dignified construction asks that you respect it and its space. It also has some very distinctive landmarks. We built a lot of unique props specifically for this map only.

Maja: Ministry is visually very unique and recognizable in terms of environment art. Environment plays a big role on this map not just in a visual way, but also in a way that sets the general atmosphere and the feelings when you walk through it. 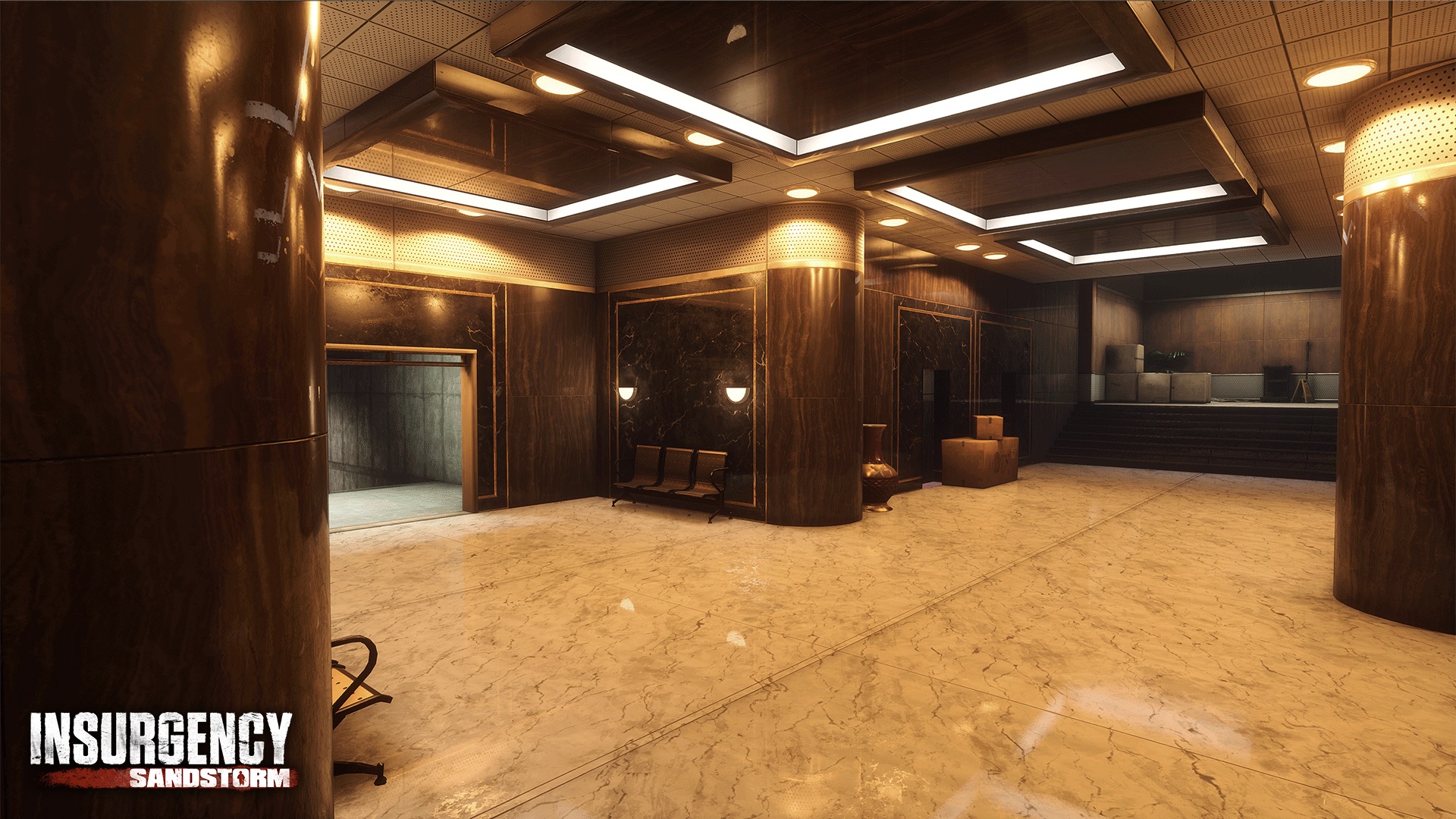 Maja: I wanted for every room and corner, basically every inch of the map, to have a purpose. Instead of focusing on looks only, I wanted each area to be practical and tell a story, while always keeping gameplay in mind since gameplay always comes first. Whenever I add or remove anything, I double check from all angles to see if it’s good and fun for gameplay.

What are each of your favorite parts of Ministry and why?

Jeroen: For me, it’s the spawn areas! It’s the first impression of the map, the first thing the player sees. We spent a lot of time on these areas. The Security side starts in a bit of a cleaner area, and the Insurgents in a bit more of a chaotic one which we achieved by adding certain aspects like a crashed car against a planter.

Vuk: I’d say the garage area as it’s a great example of a place that is very visually busy, but still clean flowing in terms of gameplay.

Maja: I really think that all the areas are amazing, but for me the lobby area simply makes my heart start pumping and takes my breath away. 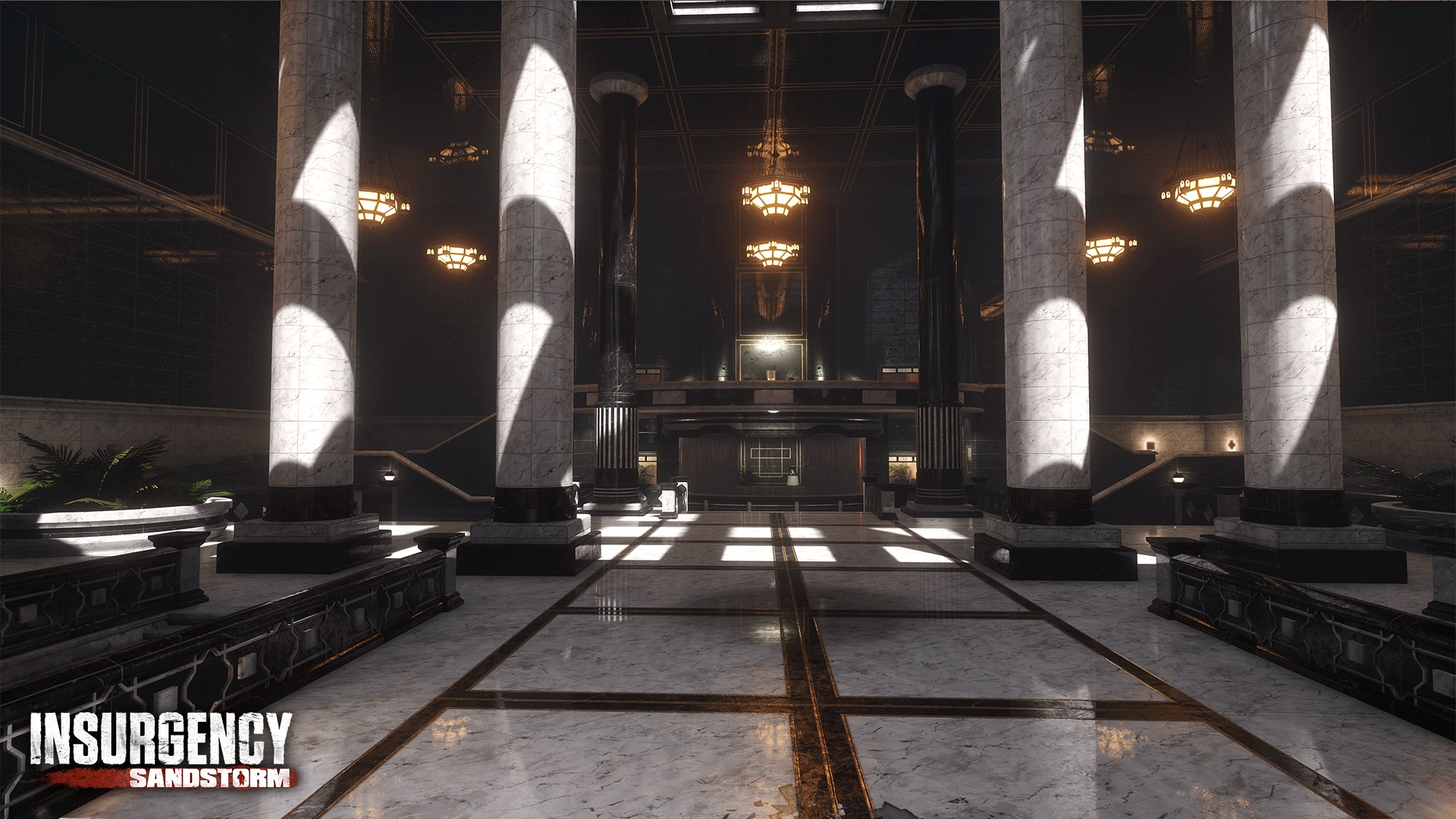 Very important question: Will there be fire alarm sprinklers?

Jeroen: Oh yes! We added a lot of destructible elements to this map, who doesn’t want to destroy things. So many things!

Vuk: Oh yeah, there will also be some new interactive props which have never been seen before in Insurgency.

Maja: Yes and it’s going to be a lot of fun.

What are some other games that inspire each of your work?

Jeroen: I play a lot of different games. Most recently I replayed the campaign of Titanfall 2 and also played a bit of the Resident Evil 2 remake. But I enjoy some old school Mario games too. Now you know why we have so many pipes in our levels.

Maja: Red Dead Redemption 2 is the most recent game I played. The visuals really impressed me.

One last question for Jeroen: how do you sleep at night knowing that somewhere out there, somewhere, there is an Insurgency server playing Sinjar Push with a Security team getting slaughtered on the hill as they try and fail to capture Alpha?

Jeroen: Thinking about that makes me all warm and happy inside! Except when I have to capture that hill myself. I mean come on, who designed that?

Will this slaughter continue when the Sinjar remake is added to Insurgency: Sandstorm?

Jeroen: I’m afraid so, and you better dress warm! That hill is not gonna capture itself. 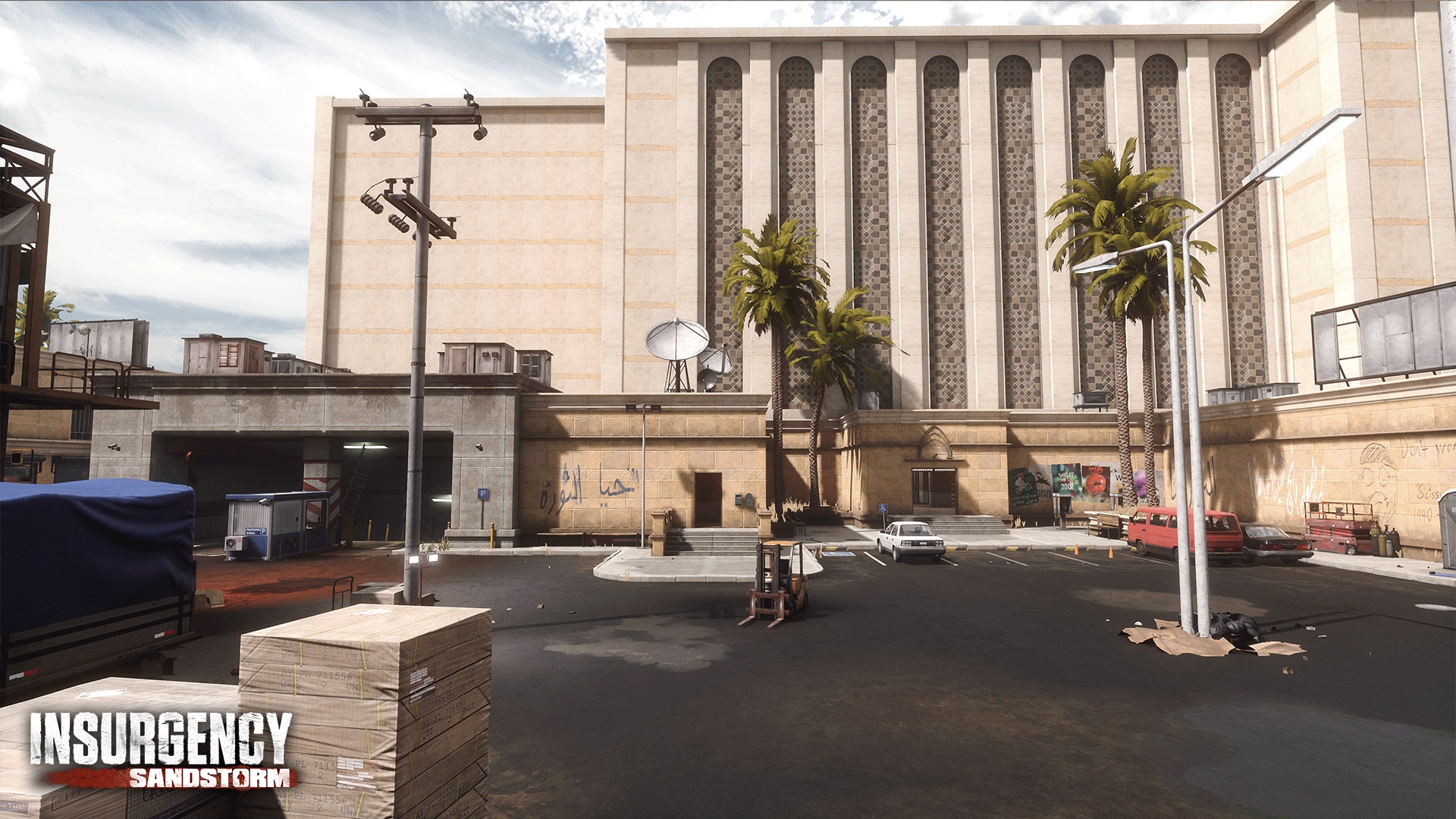 A big thanks to Jeroen, Vuk, and Maja for their hard work on Ministry and taking the time to participate in this interview, and another big thanks to everyone on the level design and level art teams. We also want to thank another team member of ours Matthias Schmidt, one of our German environment artists who contributed hugely to Ministry’s gorgeous interiors by creating all the wall, ceiling, and floor materials you can see shining so nicely in the screenshots above. His and the rest of the team’s work really helped make Ministry stand out from the rest of Insurgency: Sandstorm’s maps, both in terms of visuals and gameplay.

Remember you can play Ministry right now on our Community Test Environment, where you can also check out our new game mode, new weapons, new optics, and more. Ministry will be coming out later this month as a part of our version 1.3 game update. It will feature Firefight, Skirmish, Team Deathmatch, Checkpoint, Hardcore Checkpoint, and Frenzy Checkpoint game modes. We hope you enjoyed this Community Update, and be sure to keep your eyes open for more.