It has been a crazy month at New World (well, at our homes) since the last blog, due to preparing the 1.6.3 patch, making sure the CTE was ready to roll and continuing to lock down everything for 1.7 Operation Nightfall, releasing on June 16.

One big thing we did since the last blog was our community survey. A lot of you have asked to see the data, so we’ve prepared some of the information that we can share with you all: 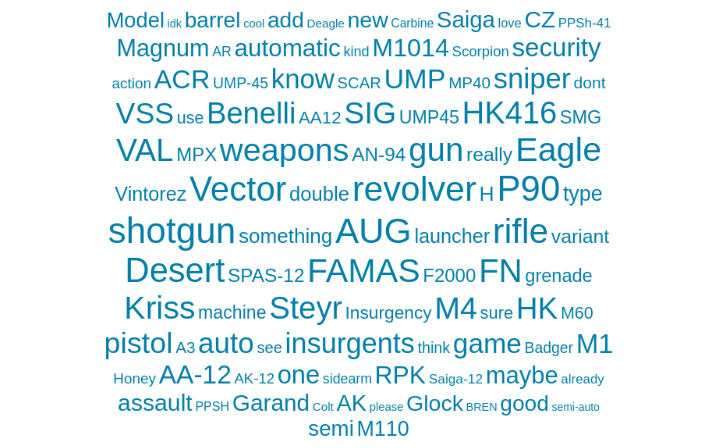 This is a word-cloud that represents the most commonly used words when asking about the most desired new weapon. Pretty easy to see which guns were the most requested. I too would like to see some big FAMAS energy in the game, and we can spot a few weapons in here that we plan to add to our Fall update. It’s up to you to guess which ones! 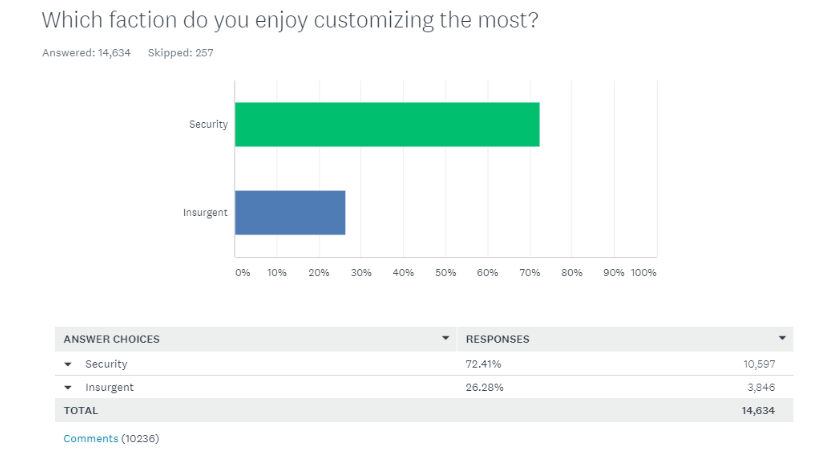 We learned that people overwhelmingly prefer customizing Security, so that’s a good indicator that we need to improve upon our Insurgent customization options. With the next few big releases, we think you will all enjoy what they have coming. 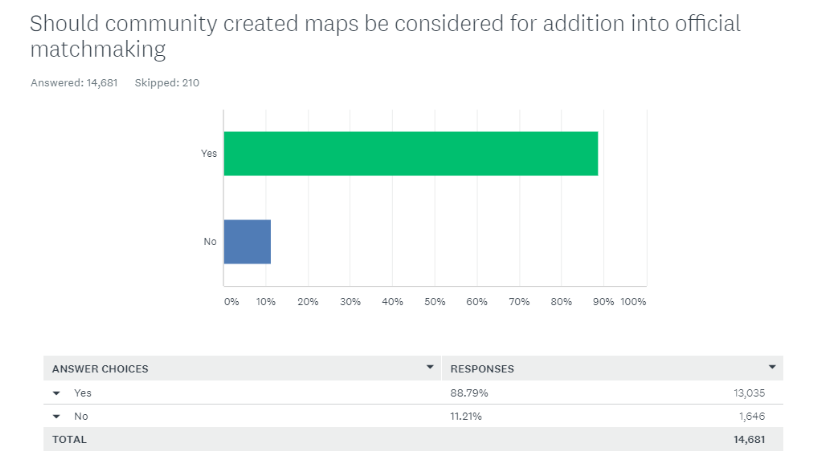 Although this was not surprising at all, almost nine out of every ten players think community maps should be considered for official matchmaking. We are currently talking about a potential contest where winners of an official Sandstorm contest could get their maps added to the game officially! 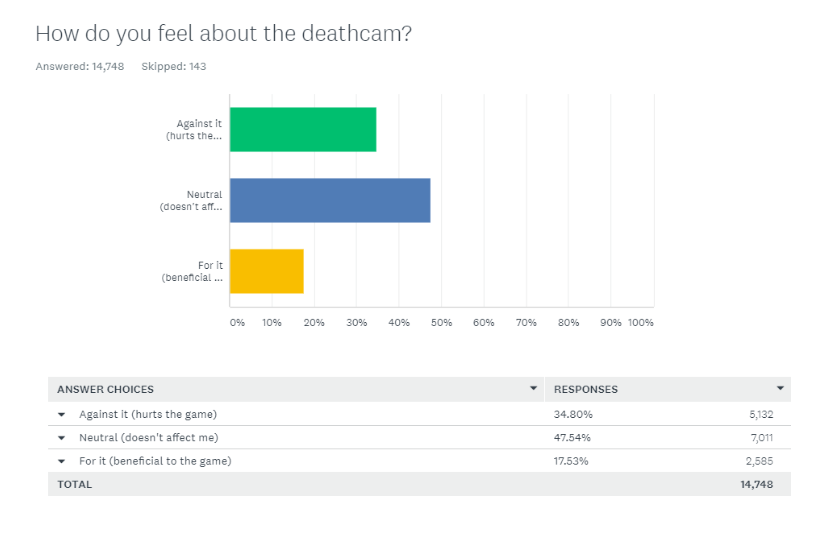 THE INFAMOUS DEATH-CAM QUESTION! Just over ⅓ of responses were specifically against it, nearly half of the players didn’t mind either way, and just under 20% called it beneficial. We’ve seen people calling this question rigged before we ever even posted the data – we promise we do not have the time to submit thousands of fake surveys to skew the data.

By now, we all know why we added the death cam, and we understand a lot of you are against it. The benefit to new players and retaining them is very valuable. We want to continue building the player-base and that benefits you as well – more heads to click.

We promised we would ask the community about the death-cam so we did. With just over ⅓ of survey takers actively disliking it, and ⅔ either feeling it’s beneficial or aren’t concerned with its existence, we feel it is better to keep it and help out new players for now.

The 1.7 public CTE took place this last weekend and we hope you had as much fun as we did in the Play with the Dev events. It was great to play with and talk to enthusiastic players over comms, and discuss feedback and suggestions. We ran into a few small issues with things like spawning entirely blind in Hardcore Mode without even a flashlight, but overall it was a success and we can’t wait to hop back in and get entirely blinded by a rogue flashlight again. We appreciate all of the feedback we received from the CTE survey and in the CTE Steam subforum.

Only eleven more days until the 1.7 Nightfall update is officially released! If you haven’t been keeping track of what we are adding, here is the steam thread with every day’s reveal so far: https://bit.ly/3dqEa3b. We still have a couple of reveals up our sleeves, so make sure to follow us on socials to not miss out:
Twitter
Instagram
Facebook

As a team, we are really looking forward to dedicating time after 1.7 to fixing bugs and optimizing the game with our Operation: Clean Sweep initiative. It’s always standing on the razor’s edge as to how we dedicate our development time as a small team, but we know optimization and stomping out bugs are super important.

Our plan moving forward (and this is super tentative, things change and they change quickly) is to have a major release each quarter, the next coming in the fall followed by a winter update. In between these major updates, we will have smaller patches focusing on optimization and more bug fixing. Please continue to report bugs to our support desk.

Our large quarterly releases will always follow a theme, for example, 1.7 was Nightfall. We are already hard at work doing high-level planning for 1.8 and some of the ideas we have seen are super exciting, we’ll talk more about these in a future Community Blog.

We are going to close out this month’s community blog with another NWI Employee interview. This month we are speaking to Michael Grills: 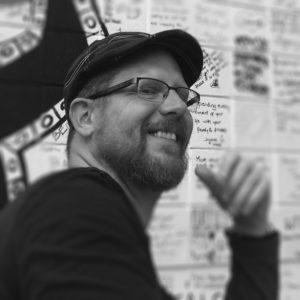 Hey Michael, thanks for taking the time to answer some of our questions, we know you are a busy man. Let’s get started…

What is your position at New World?
I’m currently the Art Director for Sandstorm and New World in general.

What does that mean, what do you do?
As Art Director I help the team improve the brand, the atmosphere and the overall look of our games.

What was the first game you ever worked on?
Baldur’s Gate 2!!! I was an additional artist doing clean-up work just before the game shipped. I had no idea what I was getting into, I just knew I wanted to work in games. My very first assignment was clean up on a stain glass window.

What was your inspiration when planning the art aspect of Nightfall?
We were looking at modern warfare tools that are used for any type of night engagements as well as how to create that uncertainty that any military person feels when going into a battle with limited sight. We also want the players to feel cool when they load up their gear and be able to try out different ways of expressing themselves inside the game.

What was the biggest struggle you faced?
I joined the team after Sandstorm had already shipped and many of its art decisions had already been made. The team here is very interested in authentic weaponry and gears that don’t allow players a lot of room for creativity. We want to add more ability for self-expression and up the cool factor, but we also need to stay true to the current look of the game. We’re trying to fit into the current look of the game while adding more flair.

What was the most exciting part of creating this whole new aspect of Sandstorm?
For me, it’s always about the atmosphere. I’m less interested in the details of the weapons or gear and more about the overall feeling that the art can produce. Players may have noticed that the shadows in our maps are taking on a little bit of color and that things are a little less brown in the new maps. We can’t go too far with that but there are areas we are experimenting with.

How did you want to differ from other games that have night gameplay? What stands out to you as unique or different in Sandstorm: Nightfall night gameplay.
Sandstorm is scary hard to play in the daytime. We made a game that if you let your guard down or don’t work with your team, you’re in trouble. The night version makes it even harder. Play with your friends.

What kind of art changes are made for the sake of performance in the game?
The list is extensive. Everything from fixing level geometry to lowering the particle effect count. Optimization of materials and textures as well as fine-tuning our animations. My very first job when joining the team was to organize the optimization of the art assets as it’s a huge request from the community. Some of our fans aren’t as happy with the changes but most of the community is really interested in a better gameplay experience and I agree with that. The team here was surprised that I put gameplay over art. But I’m a gamer too and I want a great experience. Art is more than just visuals. It’s a feeling and our players want the game to feel great.

What are you working on now?
We are working on the next update. The team has picked what they want to put in it and we are just figuring out how it should look. DLC is important for the continued life of this game but it has to be cool and still fit the Sandstorm universe.

Do you still think yourself and fatherHank are in the running for the two worst Sandstorm players in the company?
I am the worst at Sandstorm on the PC but just wait until we get on Console. I’m the only one on the team that can finish our Demo levels on PS4 against the AI. I’m bad with a mouse and keyboard but I’ll challenge anyone on the team with a control pad. There I said it… What? What?

Well, we still haven’t left our houses, but the weather is warming up for us in the Northern Hemisphere, so it’s nice to even sit in the backyard and soak up some sun. Then we run back inside and click on some heads some more.

We hope everyone is staying safe out there, be kind to one another,